Everyone seems to be feeling better except Paul who seems to have finally gotten it pretty bad. Meighan still isn't 100% but she's pretty close. Alex is basically back to normal. I've just got the cough that won't go away.

I have a few pictures of the twins to share and a layout that I put together on Sunday while the kids napped. But, before I get to those, I just wanted to say that Alex is becoming quite the mimic. Yesterday he said all kinds of new words - Eagles, Brown Bear, Pizza, Green Beans, football (not new but very cute). Almost anything we said, he tried to say. So cute. Meighan isn't into mimicking - she'd prefer to just talk even if it is usally babbling that no one can understand. They really get frustrated when they tell us something and we can't grasp what they want. Most of their tantrums these days are a direct result of their inability to communicate with us the way that they want to. So, 'real' talking is just around the corner, I'm sure. They are getting so big! I'm having to move them into 18 month clothes now. Well, pants that size are still a bit big but we've definately moved into 18 month shirts and night outfits. I just can't believe how much they've grown over the last 18 months. It seems like yesterday that we were just hoping and praying that they'd get to 4 pounds so they could leave the NICU and come home with us! Time flies!

Well, here are the pictures and the layout ... 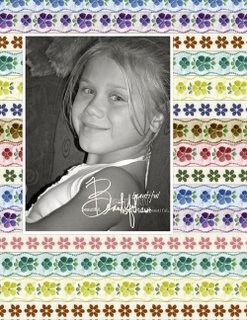 This is a layout I did of Sami - tried to keep it simple and focus on the word art. She's a beauty and it scares us to death! Luckily, she's as beautiful inside as she is outside! 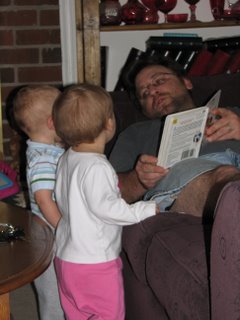 Meighan and Alex have finally begun to show an interest in books (YEAH - I'm so excited since I love to read and want them to develop a love for it as well). However, I think I'm going to have to get them some new books because they love two in particular and I think we've read them at least a hundred times over the last week or two. Mommy SO needs some new reading material! 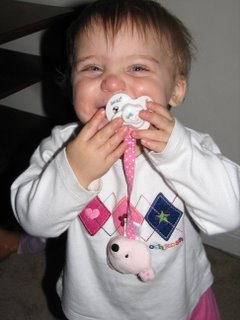 Apparently, Meighan and Alex have rediscovered their binky's and think it is hilarious to 'pretend' to be a baby and put it into their mouths. Just cracks them up! Interesting since neither of them were ever particularly interested in them as babies. Well, Alex did for a small time but it went by so quickly that I forget that he once liked a binky. 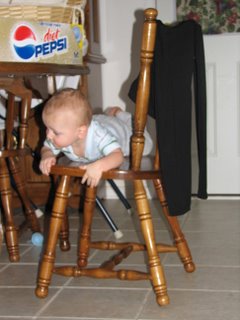 This is a familiar site in our house. Alex loves to climb and is constantly trying to get up on stuff. He loves the kitchen table and uses the chairs to get himself up on the 'forbidden' table on a regular basis. He loves to scale the couch, tables, chairs, dressers, and pretty much anything that looks like it would freak Mommy out to see him on it! He has no fear and rarely does more than scream out when he falls. However, this scaling is the primary reason that he has a ton of bruises at any given time! 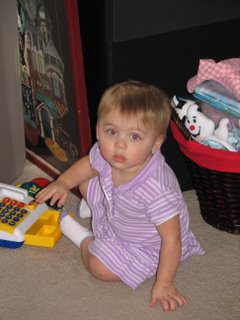 Isn't she a cutie!?!? I just think this picture is adorable and wanted you to see it! 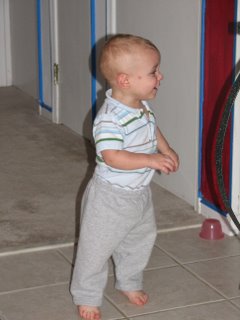 And, last but not least, here is Alex again. On the go, as usual. Too cute.

You've been tagged. Please visit my blog for details: http://kim2002.typepad.com