Book Review Musings: The Forest of Hands and Teeth by Carrie Ryan 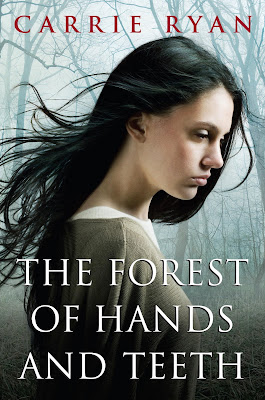 In Mary's world there are simple truths. The Sisterhood always knows best. The Guardians will protect and serve. The Unconsecrated will never relent. And you must always mind the fence that surrounds the village; the fence that protects the village from the Forest of Hands and Teeth.

But, slowly, Mary's truths are failing her. She's learning things she never wanted to know about the Sisterhood and its secrets, and the Guardians and their power, and about the Unconsecrated and their relentlessness. When the fence is breached and her world is thrown into chaos, she must choose between her village and her future - between the one she loves and the one who loves her. And she must face the truth about the Forest of Hands and Teeth. Could there be life outside a world surrounded in so much death?

This novel was really interesting and, overall, I enjoyed it quite a bit. What struck me immediately about the book is how much of the premise reminded me of the movie The Village. There are many differences, of course, but there are also quite a few similarities. It took me awhile to get the setting of the movie out of my head, to see this book as its own entity without seeing the scenes from The Village in my mind as I read.  Eventually, however, I became engrossed in the story of the novel and was able to let go of those similarities and begin to enjoy the novel for its own merit.

The novel is very character driven and this kept me from focusing on what could have been a downfall of the book - the plot. Although the premise was interesting, I think the plot was not nearly as fleshed out as it could have been. There were clear holes in the plot that were frustrating. There were aspects of the story that forced me to not over think the story or I would have been annoyed at some of the inconsistencies that I saw in the story otherwise. I was able to get past it but I can understand that some readers might not. I don't want to go into detail on these inconsistencies because I regard them as spoilers and wouldn't want to post them here. But, some aspects of the world created by Carrie Ryan seem a bit outlandish and made me have to force myself to suspend my disbelief in some ways. Again, I was able to get past it but I wanted to mention it as it is ultimately the reason I didn't feel comfortable giving the novel 5 stars.

However, the author's writing was excellent which helped me let go of my issues with the plot. I became very invested in each of the characters in the novel and felt that Carrie Ryan really did a fantastic job with making each of the characters memorable and engaging. That is what saved the book for me - the characters.  My only character issue was about the relationship between Mary and Travis. I eventually came to understand what the author was doing with their relationship but there were times when I just didn't 'GET' the relationship between the two of them. There was in some ways, for me, a sense of much ado about nothing. Yet, in the end, I think Carrie Ryan pulled that relationship off for me, despite the rocky start.


I was also surprised at how the scenes with the zombies were portrayed. I anticipated that their interactions with the characters would bother me (as I'm not a big fan of the zombie) but in the end they didn't come off nearly as scary as they could have been. This was something that was a bit lacking in the book - the Zombies were not nearly as frightening as I think Ms. Ryan intended, at least not to me. The 'idea' of them was much more frightening than the reality.


I've read that a lot of other readers were unhappy with the ending which I can understand. It left a lot of questions unanswered ... But, that is likely because they will be answered in the sequel that will be published in 2010! So, it didn't bother me or take from the overall book that there were questions remaining as I knew that there was a sequel planned.


Overall, I really enjoyed this book. I liked Mary and reading about the struggles she faces given the specific circumstances of her life.  I will be reading the sequel and hope that we learn more about this world of Mary's and how it came to be the way it is. And, a part of me can't help but to hope that the sequel will fill in some of the holes from the plot of the first book.

I read this book a few weeks ago, and although you've written a much better review than me, I agree with most of what you said. I didn't completely love this book either, but I am definitely going to read the next one when it comes out it 2010.

This was one of the books that failed the 'hype' test for me. I waited for it, read many reviews where bloggers just gushed about it, and then when I read it I was so let down...I struggled. In fact, I didn't even finish it. I read the first 100 pages, and then the ending. I feel like I had some of the same concerns you did - the relationship between Mary and Travis, the slow-moving plot, and the zombies. But like you, I'm going to give the next one in the series a chance. I liked the ending enough for that, and I won't believe ANY hype this time, which may improve my disposition overall.