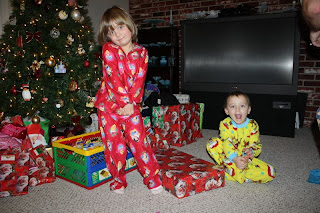 And it began ... the kids eagerly woke us up at just before 8 a.m. (we actually got to sleep in a tiny bit) eager to get downstairs and open those presents around the tree! 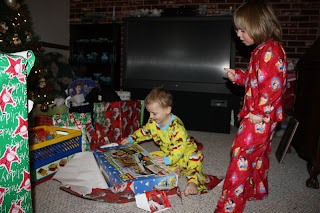 Alex has been asking for this Toy Story playset for AGES! And he LOVES it, carries it around with him everywhere he goes, playing with it almost all the time! 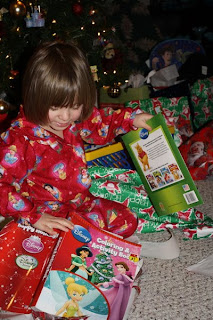 Meighan received a lot of artsy stuff including coloring books, activity books and learning books to practice writing in. She's a crafty girl! 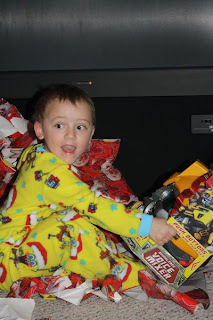 And, Santa must have gotten wind of Alex's obsession with Transformers - he got the Bumble Bee Voice Mixer Mask and  Blaster. Grandma and Grandpa also got him a HUGE Optimus Prime which he's been wanting for weeks! He was a happy, happy boy! 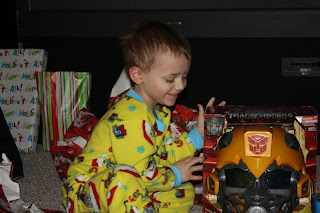 Lots of dress up clothes for Meighan! She loves to dress up. Last night, while watching Hannah Montana (yess, I know she's only 4 but she's in love with Hannah and I figure it could be worse ...), she turned to us (all decked out in her dress up clothes) and asked us if she was as beautiful as Hannah Montana! 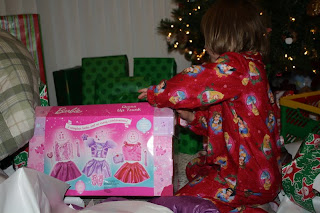 And Meighan unwrapped a HUGE doll (almost as big as her) with her very own dress up clothes! 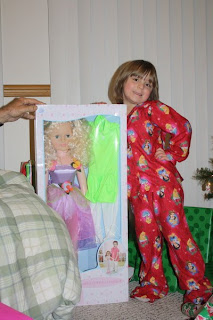 Pop Pop and Nina sent gifts for the kiddos - here is Alex with his BumbleBee Transformer - he carries this around with him as well, transforming it from Bumble Bee to the car over and over and over. Thank you, Pop Pop, Nina and Elizabeth! We love you and miss you very much! 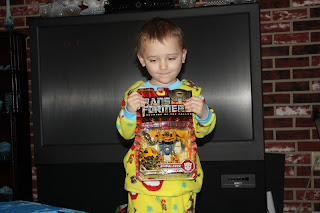 And here is Meighan's gift from Pop Pop and Nina - a cute little dollhouse for a special kind of mini Barbie doll. This was a HUGE hit! In fact, today, we were at the dentist to get Meighan's filling fixed (she did GREAT by the way! Not one tear despite having to have a shot in her gum for the drilling) and he asked her what her favorite present was at Christmas. She immediately told him all about this dollhouse! 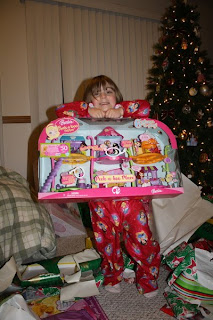 Here's Alex with the Optimus Prime I mentioned earlier - he will not sleep if its not on the shelf above his bed! 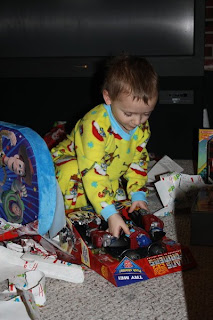 Grandma and Grandpa also gave Meighan these two Barbie doll heads - you can do their hair and makeup. Well, Meighan has been obessed with them from the moment she laid eyes on them! 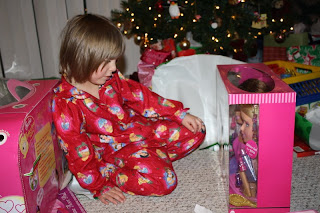 This was our only not so great moment - Meighan opened a game that Mommy suggested that Grandma and Grandpa buy her - and she got upset, saying it wasn't on her list. LOL I had to explain to her that sometimes people buy us other things not on our list because they think we'll like them. She soon got over it and now this is one of her and Alex's favorite games to play together. 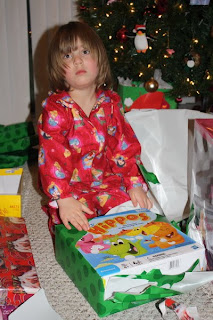 Santa must have seen Pop Pop and Nina's gift because he brought Meighan some of the little Barbie dolls to play with in her new dollhouse! 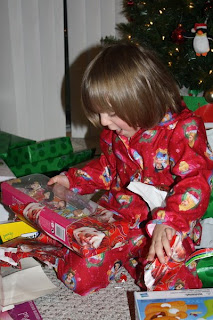 Mom and Dave (and the kids) bought Paul this beautiful dragon this summer and gave it to him for Christmas. He immediately placed it with his other dragons in the office! 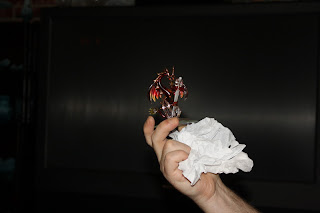 My mom, the queen of knitting, made Meighan this cute little poncho. First of all, is that not the best color EVER?!?! Also, its just adorable on her! 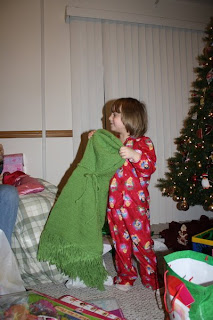 And Mom made this cute little sweater for Alex - it's so adorable! I'll get some photos of him in it soon! 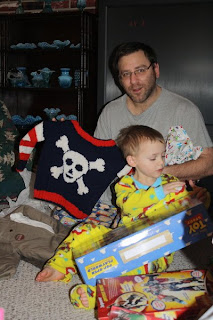 Ahhh, the gift that keeps on giving. Meighan LOVES the movie Enchanted. We've rented it from the library several times but Grandma and Grandpa got her a copy of her very own! 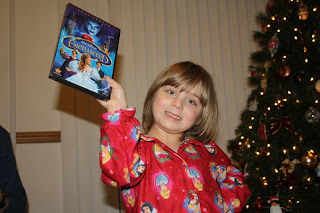 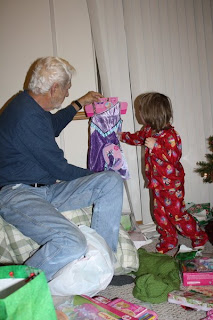 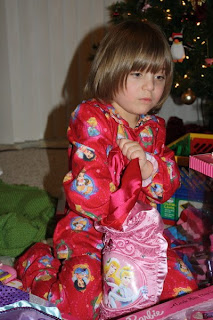 Alex immediately got to work getting his Toy Story play set all set up! 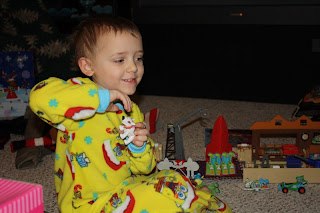 Mom checking out the photo book the kids made for her ... 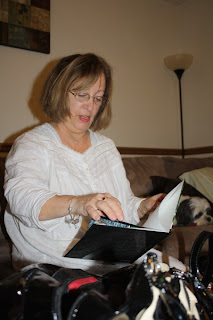 Paul got a dragon and I got a .... PIG! It's so beautiful. This photo doesn't begin to do it justice! 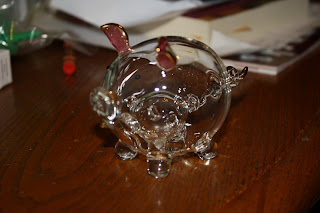 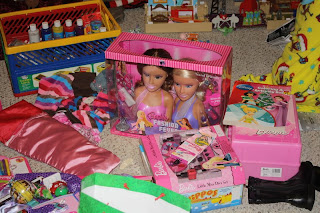 And, miracles of all Miracles - it SNOWED in St. Louis on Christmas day! Not much but enough to make it feel like a White Christmas! 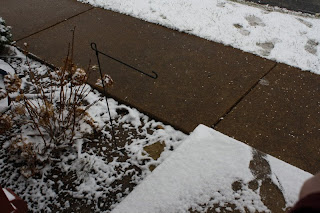 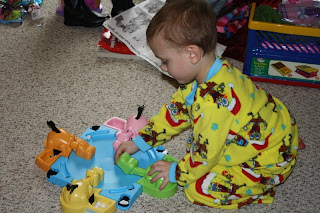 If you look closely, you can actually see SNOW! 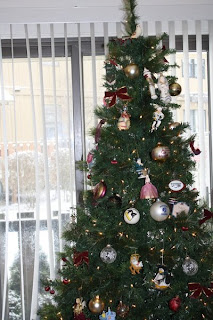 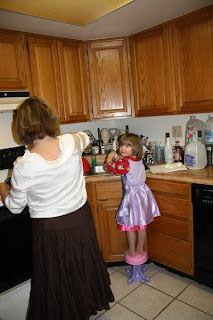 We spent most of the day just relaxing, hanging out, watching Christmas movies and playing with our toys! A nice quiet day! Eventually the kids begged Paul to take them out in the snow (me and Grandma opted to stayed in because it was FREEZING out there) but I did get one decent photo of Alex, all bundled up! 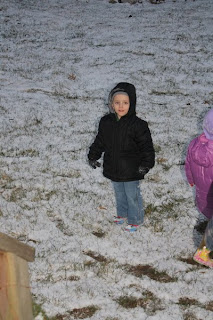 We had a great holiday and I hope that you did as well!

Amy, my son Adam got the helmet and the blaster too for Christmas! His Pop-Pop also got him the suit/costume with the plastic mask. It is a shame we don't live closer I could see our 2 Bumble Bee's in action with their new gear! Great Photos and what a wonderful Christmas you had!

My sisters kid got a mini bucking bronco!