Hi everyone! Things have been pretty busy here, we have a lot going on right now. I should have some news to share tomorrow but I can't say anything just yet! But, its good news for me and for our family.

Meighan and Alex have been under the weather again. Friday night was Meighan's night for keeping us up all night throwing up and then Saturday was Alex's night! It was quite a weekend! But, they seem to be at the end of it so I'm hoping that they'll be all better very soon! I hate to see them sick although they do act like angels when they aren't feeling well!

Here's a quick story about Alex that I think is interesting - he doesn't tend to talk very much. Some but not a ton. Yet, I just know that he's got a larger vocabularly than he actually uses. Meighan, on the other hand, talks CONSTANTLY. She is a chatterbug! Anyway, when he began to throw up on Saturday night, he yelled out "Mommy" and then said "I trow up" when we came into his room. It was so cute and pitiful at the same time! We've never taught them to say the words throw up but he picked it up and was able to say it when he needed to. He's much smarter than he appears sometimes, I just think he isn't as vocal but he's definately still building up quite a vocabulary!

Another Alex thing is that he has recently decided that Mommy is the BOMB! He wants me ALL THE TIME! He sits with me, follows me around, and wants nothing to do with anyone but me. It's so cute and I intend to enjoy it while it lasts! It is such a wonderful thing to see him really fall in love with me. I can see it in his eyes and in his every move right now! And I know that its temporary because one day, not too far in the future, he will suddenly let go and begin to identify more with his Daddy.

At the same time as I'm experiencing all of this, I was reading Anna Quindlen's book Living Out Loud and there was a passage that just resonated with me because of all of this and I thought I'd share it here -

"I am aghast to find myself in such a position of power over two other people. Their father and I have them in thrall simply by having produced them. We have the power to make them feel good or bad about themselves, which is the greatest power in the world. Ours will not be the only influence, but it is the earliest, the most ubiquitous, and potentially the most pernicious. Lovers and friends will make them blossom and bleed, but they may move on to other lovers and friends. We are the only parents they will have. " - Anna Quindlen

I have a few layouts to share that I've done since I last posted. The first is my most recent page and my new favorite! I just had to document Meighan's new favorite things in this layout. I used Jen Beschinski's Paint Drippings which were so fun to work with and I also used Traci Reed's new Blendstrokes. This was a fun one to play with! 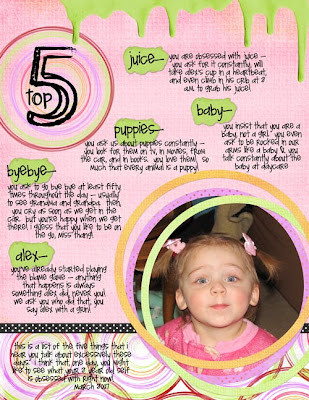 And here is another using Traci Reed's new Joyful kit - this one is about Meighan discovering the shawl that she got for Christmas from her Grandma who made one for her and for her baby! Too cute! 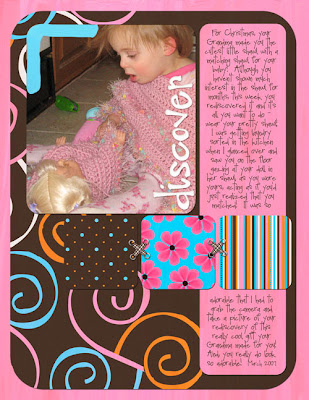 And last, but not least, is a spring layout using the Lilypad Spring Kit and Toni Berman's Metal Linkadoo's! (I'm on Toni's CT as a Guest this month and having a blast!). 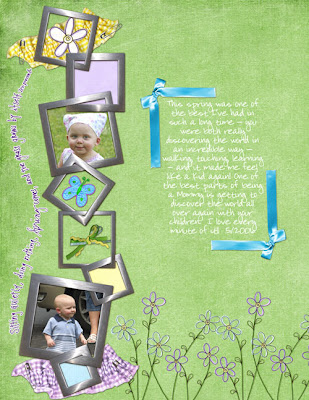 Okay - that's it for tonight! I've got a ton of stuff to get done before bed tonight!