I'm so sorry that it's been so long! We've had such a busy time in the last couple of weeks that I just haven't gotten over here to update anything. Between work and the holidays, I've been swamped. I've been working on all of the great holiday gifts that I want to give to folks which has kept me really busy. I haven't scrapbooked a page in SO long! But, once the holidays are over, I'll have to catch up!


Let's see ... what have we been up to? Well, the twins are doing fine. They are growing up way too fast for my liking! At 5 a.m. this morning, Meighan begins screaming at the top of her lungs so I run downstairs to find her out of her crib. She's not even 22 months old and she's climbing out of her crib! YIKES! I was hoping I'd have a bit more time before they came out of their cribs by themselves. Now that Meighan has figured it out, I doubt it will be long until Alex discovers it too! In fact, I'm surprised he didn't figure it out. He's such a climber. But, it seemed to scare Meighan quite a bit which might work in my favor. Maybe she'll stay in her crib to avoid the being scared part. At least for a little while. We'll see!
Alex counted to 3 all by himself the other night. Paul was pulling sponges down and Alex clearly said 'One, Two, Three' as Paul pulled each one off. We couldn't believe it! What an amazing thing! They really are very smart but I was amazed that he actually got the 1, 2, 3 concept and connected it to the idea of counting. Very smart little guy we have!
I found out why Meighan was crying at night when they were put to bed for the night. Apparently, Alex was climbing on one of his toys and reaching over and turning on the light. So, Meighan was crying because he was turning the light on and off on her. I'd noticed the light was on in the morning but I assumed he was doing it when he woke up. Apparently not. As I left their room one night I noticed him reaching over for the switch which made me realize that they'd been sleeping with the light on for a couple of weeks. So, I thwarted all his plans by unplugging the light that was connected to the light switch. Now, they are actually sleeping better all night. Who knew?!?!?
Both of the twins have been fighting colds for a couple of weeks. Mostly just snotty and coughing but they obviously haven't been feeling that well. I'm hoping they will feel better by Christmas!
Here are a few recent pictures I thought I would share ... 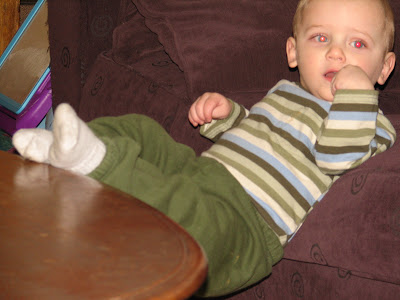 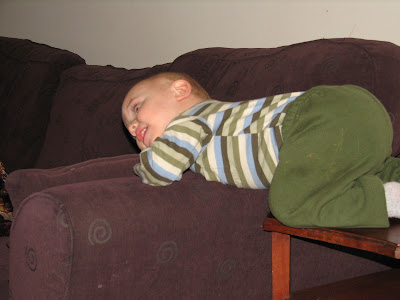 And another funny shot of Alex. The boy finds the oddest positions to be comfy! 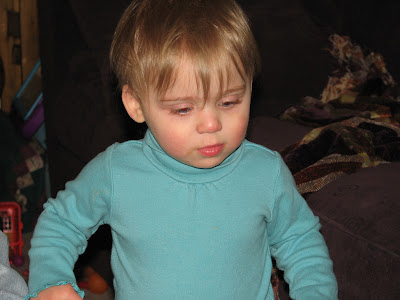 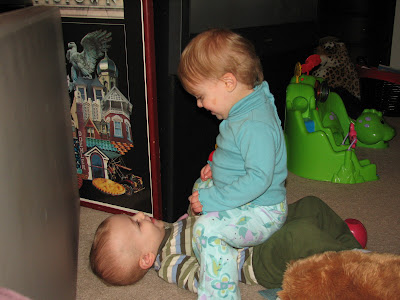 Their new thing is to sit on each other, usually Meighan does the sitting and Alex the laying. Too funny! This night they were cracking each other up by sitting on each other and jumping up and down. Alex took it all in stride. I love that they are beginning to play together and talk to each other (even if it is in their own little language).

On Saturday, my mom and Dave had their Holiday Open House and all of the kids and grandkids got together for food and fun. We were really excited to get to meet Samara, Brian and Monica's new baby. It was great to catch up with everyone and see what everyone is doing these days. Here are a few pictures from the night ... 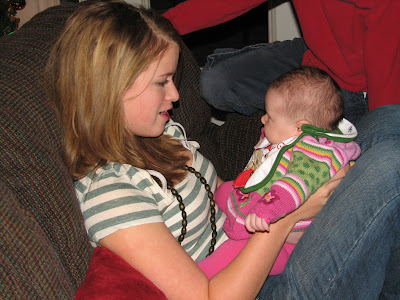 This is Matlin with the newest Metz, Samara! Is she not adorable? Look at that little outfit!!! 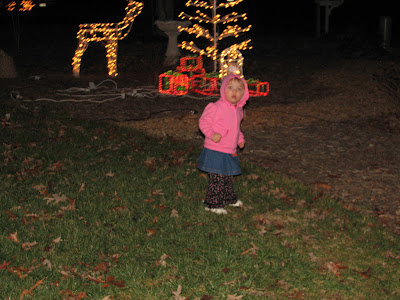 They planned a big ornament hunt in the yard and Meighan had so much fun trying to keep up with the bigger kids! 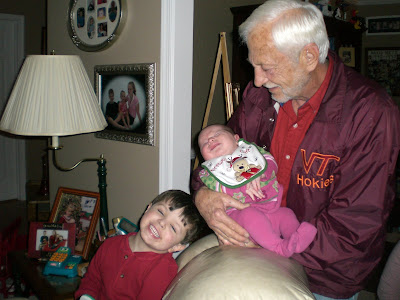 Here's Dave with Aiden and Samara.

I have more pictures to share but its getting late and I have a lot to do tonight. I'll be back soon with more pictures, I promise!