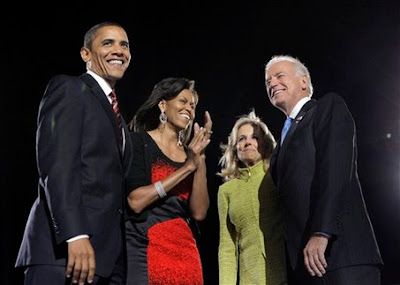 I am very pleased with the election of Barack Obama as our 44th President. I believe in him and feel very strongly that he will take this country where it needs to go next. However, I also know that there are many people who are not happy with his victory and wanted to say that I know how it feels to lose an election that you feel is of critical importance to the future of this country. I've felt that way for the last eight years so I can relate to all the feelings. I feel that the differences between Democrats and Republicans are not so large. I think we all care about our familes and friends. That we all want what is best for our nation and its future. We just have a different philosophy on the best way to to do that. I hope that we will find a way to come together to do what is best for all of us. I am so hopeful for our country and its new leadership - to build bridges across party lines is never easy but I truly believe that Obama can do it if anyone can ... I also want to say that I was impressed with John McCain's concession speech. I know that it was a difficult night for him but I was proud of him for being respectful and honorable at the end. I wish his supporters in the audience had been the same but I understand the difficult emotions that they must have been going through at that moment. I'm trying to be hopeful that his supporters might do as he asked and 'help [Obama] lead us through the many challenges we face.'

The fact that we now have an African American President Elect is an amazing thing and we should all be amazed at how so many people in this nation brought this to be with hope, determination, love, support and patriotism. Even those who don't support his politics have said to me that it is an amazing thing to have witnessed and are excited about the page in history that was turned today as the result of this election.

I am excited for Obama but I do not envy him the road he has before him. This nation is a mess and needs strong leadership. I believe that he is the right man for the job but I know that it will be rough terrain in many, many ways.
Posted by Amy at 10:13 PM